Smart-99 is a registered trademark. Under this mark the small company produces high-quality dog sports equipment for Agility-sport and is selling it worldwide by now. The Swiss founder Maurice Jud settled the company in a corner of the three countries Switzerland, Germany and Austria on Austrian ground. The idea for the foundation arose in the year 1999, the year of birth of his dog ''Smart'', after whom the company was named; in Wiktionary, under the term ''smart'', one can find the meaning: smart, resourceful, clever, artful, elegant, pretty, spirited etc.

''Smart'' was not only the right name for the dog: it also became the name and motto of the company and its agility. And so the trademark ''Smart-99'' was founded in 1999. From the beginning, the small company aimed at designing its products as high quality as possible, giving special attention to the safety and well-being of the dog, which was previously neglected in this branch of business. The quite young Agility sport underwent significant changes in about 30 years of its existence, both in activities of the dog and the dog handler. In the beginning speeds of 1,5 to 2 metres/second were seenbut today there are dogs can go as fast as 4 to 5.5 metres/second on average – and this over a stretch of 20 hurdles! Unfortunately, the equipment industry was not able to keep up with this sportive evolution – Agility and the market urgently needed smarter equipment.

The special raceway coating on the so-called contact zone equipment is most striking out of the many details of our Smart-99 products. This coating, which is internationally trademarked by Smart-99, is called ''Integral-99''. It allows the dog to dash over the equipment with safe and skid-free steps, even in the rain (top level-dogs can reach up to 7 metres/second, which is the equivalent of 25 kilometres/hour). It's a matter of surface structures, damping behaviour and ground adhesion – just like a car with its tyres and a shock-absorbers! In addition to ensuring maximum safety and quality for the dog, Smart-99 never forgot the handling of the equipment by the dog trainer; for this reason, aluminium is used in most products to reduce the weight of the equipment, which is going to be carried, and minimise the unwelcome chore of maintenance. 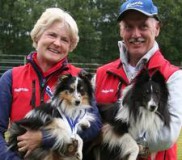 In the 10 years after its founding, Smart-99 has also developed rapidly. In the year 2009 Maurice Jud handed over the company to Wolfgang und Petra Noever in Schramberg/Germany. So the production of the agility equipments was transferred to the Black Forest.  Still run as a small family company, Smart-99 delivers its Agility hurdles to more than 20 countries on 4 continents and was the official supplier for the FCI-Agility-world championships several occasions.